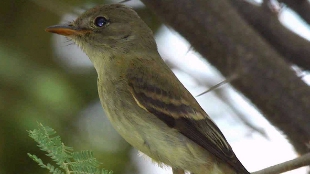 The Southwestern Willow Flycatcher (Empidonax traillii extimus), one of the endagered species allegedly given short shrift by the FWSWhile George W. Bush was president of the United States, the US Fish and Wildlife Service (FWS) reduced the area of land set aside to protect endangered species, disregarding the advice of scientists, according to a new report based on researcher-authored documents made public by the agency.

The report, authored by researchers at Tucson, Arizona-based advocacy group Biological Diversity, analyzed 169 peer reviews authored by scientists the FWS commissioned between 2002 and 2007 when making determinations about how much "critical habitat" to set aside for the protection of endangered species. The authors found that in more than 90 percent of cases, the agency decided to shrink critical habitat areas even in the face of peer reviews that suggested the species would be better served by increasing protected areas. "It's very hard...

Though the FWS told ScienceInsider that it had not yet fully explored the damning report, it did offer this statement: "The Fish and Wildlife Service is strongly committed to using the best available science to inform its policy decisions under the law. ... Scientists may not always agree on the conclusions of a scientific analysis, especially in analyses as complex and challenging as critical habitat designations. In some cases, peer reviewers may disagree; in others, our biologists may not agree with the conclusions of individual peer reviewers. Additionally, in the case of critical habitat, the law gives us the authority to consider other factors when making final designations, including economic considerations and new information we receive through public review and comment."