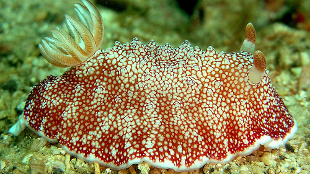 The sea slug Chromodoris reticulata FLICKR, STEPHEN CHILDSAs hermaphrodites, the diverse group of brightly colored sea slugs called nudibranches are already considered unusual when it comes to sex. But one species does something particularly peculiar: Chromodoris reticulata detaches and discards its penis after mating, then grows another to go again 24 hours later, according to a study published this week (February 13) in Biology Letters.

Having collected the sea slugs from reefs off the coast of Okinawa, Japan, researchers observed the creatures mating in tanks. They saw that sea slugs that had recently mated could not do so again for at least 24 hours. Then they noticed the reason why: the sea slugs sloughed off their male sex organs around 20 minutes after mating, leaving them without the anatomy required to repeat the trick until it grew back a day or so later.

Closer examination revealed that the...

No other animal is known to repeatedly copulate using disposable penises, and the authors speculated that the tactic may have evolved to avoid passing on rivals’ sperm stored in the mate’s vagina—which appears to get caught on the backward-pointed spines of the penis.