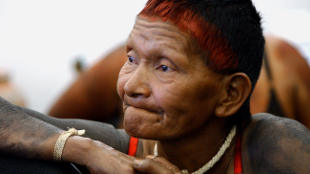 A member of the Xavante tribe of the Brazilian Amazon, where researchers detected genetic traces of Australasian populationsWIKIMEDIA, ELZA FIUZA/ABRNo question is hotter right now in the minds of paleoanthropologists than this: How were the Americas originally populated? Anthropologists have been debating the issue for decades, but with recent advances in ancient DNA analysis, researchers are getting closer than ever to answering the question. As two papers published in Science and Nature this week (July 21) illustrate, the debate is still very much alive.

Both studies detected genetic traces of human populations from Australia and the islands that surround it—an area known as Australasia—in the genomes of modern Native Americans. But the authors of the Science paper could not find a genetic affinity with Australasians in the ancient DNA of Native Americans from Mexico or Patagonia. The two teams interpreted their data differently: Pontus Skoglund of Harvard...

“This has been a really old, very controversial question with lots of different theories,” University of California, Berkeley, computational biologist Rasmus Nielsen, who was a coauthor on the Science paper, told The Christian Science Monitor. “What we have shown is that, with the caveat of this little signal in the South Americas, we’re back at the most boring, most vanilla theory—one big migration that happened around 20,000 years ago. We have no support for all of these more fanciful theories.” Some of those more fanciful theories include the so-called Paleoamerican hypothesis, which suggests that the first people to arrive in South America came from Polynesia, Australasia, or Melanesia by boat. Although Skoglund and his coauthors stopped short of full throated support of the Paleoamerican hypothesis, they did suggest that the Australasian signal in the DNA of modern Amazonians living in Brazil may offer a hint that human migration into the Americas was more complex. “We now have the possibility of there being two different streams of ancestry penetrating south of the ice sheets, so that's a very exciting new observation,” Harvard geneticist David Reich, who led the team behind the Nature paper, told NPR’s Shots.

While Neilsen and his colleagues did detect the same genetic link between Native Americans and Australasians, they focused more on determining when populations in Siberia and East Asia last shared a common ancestor with Native Americans. The date they arrived at was 23,000 years ago. “We see that mostly all Native Americans are descendants from a migration wave into the Americas, maybe 20,000 years ago,” Nielsen told The Christian Science Monitor. “You see the first unique American culture about 13,500 years ago, which spreads through much of the Americas. Right around this time, we see that the Native American population first began splitting up. We find two major groups— what we call the southern group and the northern group.” This, he said, means that the Americas were peopled by a single wave of migration of people in Siberia who crossed the Bering land bridge and proceeded south.

Reich’s coauthor, Skoglund, offered a more nuanced model. “My speculation is that there was a population quite closely related to Australasians in Northeast Asia around the time of the peopling of the Americas,” he told The Christian Science Monitor. “This population could have mixed with other populations to form the ancestral population of Native Americans. But there were perhaps multiple pulses of people into the Americas, and they had slightly different proportions of this ancestry. But which of the pulses came first and which different routes they took, we just don’t know.”

The debate surrounding how and when people initially moved to the Americas shows no signs of abating. But as more and better DNA techniques and technologies come online, the picture is likely to become clearer.