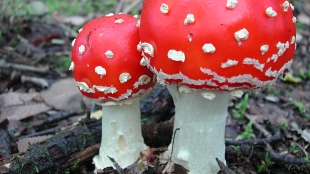 Amanita muscaria is thankfully not one of the fungal species that turned up as part of the human gut's microbiome. WIKIMEDIA COMMONS, YUG

The microbiome—that teeming mass of essential and coevolved bacteria and viruses that makes humans more microbe than man—just got a little more diverse. A team of researchers led by scientists at Cedars-Sinai Medical Center, Los Angeles, California, has revealed a veritable garden of fungal species, dozens of which have never been described before, growing inside the human body. And they link the fungi to the inflammatory bowel disease colitis in a paper published in Science last week.

Cedars-Sinai’s David Underhill, the immunologist who led the team, said that studying the function of the fungal species that inhabit the human gut is an emerging field. "There's not a whole lot out there at this point," he told Wired Science. "People have understood that fungi are there,...

Underhill and his colleagues performed experiments with a mouse model that carried immune deficiencies that specifically made the animals unable to clear fungal cells from their systems. The mice developed colitis-like symptoms but recovered when the researchers gave them an antifungal drug. They then made the link to humans by discovering that many of the patients with severe colitis at Cedars-Sinai had similar gene-mediated immune deficiencies along with a suite of internal fungal species.

Many questions about the role of the internal fungal community remain to be answered, according to Underhill. "People study [the microbiome's effect on human health] in the context of the gut bacteria, in the context of viruses in our microflora," he told Wired. "You can map all those questions to fungi."