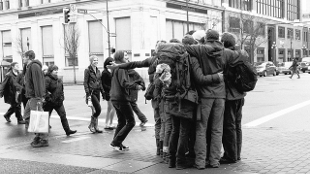 “Most people don’t even know who their fourth cousins are,” Christakis told BBC News. “Yet we are somehow, among a myriad of possibilities, managing to select as friends the people who resemble our kin.”

“It’s obvious that humans tend to associate with other people who are very similar to themselves,” Matthew Jackson, a professor of economics at Stanford University who studies social networks, told NPR. “This gives us evidence that it’s operating not just at a level of very obvious characteristics but also ones that might be more subtle—things that that we hadn’t really anticipated.”

The data were collected as part of...

But some in the field are skeptical about the duo’s conclusions, arguing that some important factors—such as ethnicity and education level, which can lead to population stratification that makes two people more likely to meet and become friends—were not controlled for.

In a second analysis of 907 pairs of friends and nearly 1.5 million SNPs, Fowler and Christakis attempted to control for such stratification or family relationships, but still not everyone was convinced. “I wonder whether [these methods can fully account for] factors known to drive friendships, like church membership, sports or other cultural affinities, that would also lead to a correlation with genotype,” Rory Bowden, a statistician and lecturer at the Wellcome Trust Centre for Human Genetics in Oxford, U.K., told the BBC, “because they reflect differences in places of origin within Europe of the Framingham participants.”