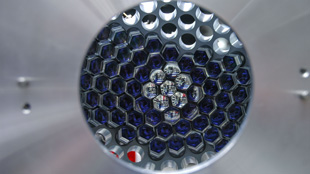 The AWARE-2 gigapixel camera consists of 98 smaller cameras and has an aperture only a half-inch wide.DUKE UNIVERSITY

Imagine a panoramic photograph with such high resolution that you could zoom in on a postage stamp more than half a mile away, or read signs that are blocks away from your vantage point. That is just what researchers at Duke University have created. Led by engineer David Brady, they have developed the AWARE-2 camera, which can take a single shot with 1 gigapixel resolution by stitching together images captured simultaneously by 98 smaller cameras with 14-megapixel sensors.

Although other cameras can produce image composites at even higher resolutions, they do so over a period of time—from minutes to even hours. What’s unique about AWARE-2 is that the dozens of cameras within the unit capture a small area of the view simultaneously—ultimately providing a single shot of a moment in time.

“When you’re in the field, you don’t have to decide what you’re going to study,” Illah Nourbakhsh, a roboticist at Carnegie Mellon University in Pittsburgh, told Nature. With the camera developed by Brady and colleagues “you can capture as much information as possible and look at it for 5 years,” he said. “That really changes your mindset.”

The researchers are also working on a gigapixel camera that can take ten images per second—close to the rate needed to make videos—to capture more dynamic scenes.

With this technology, the question now becomes: "How do we extract useful data from these superhuge images?" Brady told Science.