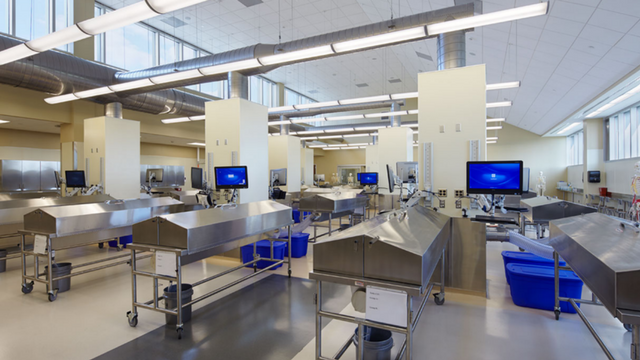 An anatomy lab WIKIMEDIA, CAMPBELL UNIVERSITYFederal officials found four fetuses among various human remains in a 2013 raid of businessman Arthur Rathburn’s Detroit warehouse, Reuters reported this week (December 26). Rathburn, who formerly sold human tissues, was charged earlier this year for defrauding his customers by sending them infected body parts and will stand for trial in January 2018.

This is the latest in a series of discoveries uncovered by Reuters documenting the unregulated state of the so–called “body broker” industry, which specializes in the trade of human body parts for use in medical research and education. The majority of the 34 body broker businesses across the U.S. that were examined in investigations by the news agency earlier this year are for-profit corporations, some earning several million dollars a year.

“The current state of affairs is a free-for-all,” Angela McArthur, director of the University of Minnesota Medical School’s body...

In general, buying and selling human cadavers is legal in the U.S., with the exception of organs used in transplants. However, it is a clear violation of federal law to trade fetal tissue.

Rathburn’s business had focused on renting out human body parts to medical and dental students for nearly seven years with his wife, Elizabeth, according to The Washington Post. It is unclear how he acquired the fetuses or what he planned to do with them.

Confidential photographs taken by federal agents during the 2013 raid, which were reviewed by Reuters, show fetuses that appear to have been in their second trimester. Some photographs also show rotting human heads stored in coolers inside the warehouse.

Representative Marsha Blackburn (R-TN), who recently chaired a special US House committee on the use of fetal tissue, tells Reuters that the discoveries raise questions on the “lax oversight” and “lax enforcement” in the human body trade industry. Like most states, authorities in Michigan are not required to inspect body trade facilities dealing with human body parts.

The industry relies heavily on the poor, who often decide to donate their bodies in exchange for free cremation of leftover body parts. Family members are often unaware of how those donated remains will be used.

For instance, the body of an Arizona family’s great-grandmother ended up for use in US Army blast experiments without the consent of the family, who had hoped her body would be used to search for a cure for Alzheimer’s disease, Reuters reports. The family had explicitly noted on the consent form that they objected to non-medical and military experiments.

The Federal Investigation Bureau, which is investigating several body brokers, including Rathburn, declined to comment on the cases, according to Reuters.