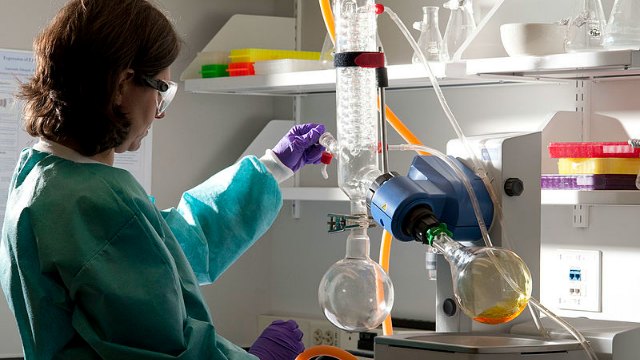 WIKIMEDIA, NATIONAL EYE INSTITUTEFrom 1980 to 2007, a little more than 8 percent of the grants given out by the National Institutes of Health (NIH) led to patents, according to an analysis published in Science Thursday (March 30). Roughly 30 percent of grants over that time period were cited by patents, indicating indirect contributions to inventions as well.

“Their findings here demonstrate that there is commercial value to funding basic science,” Ross DeVol, chief research officer at the Milken Institute, told Nature News. “That may be the most important piece of this, to be quite frank.”

The authors of the study looked at more than 365,000 grants awarded during the time period, of which nearly 31,000 were directly linked to patented inventions.

They also found that basic research was nearly as likely to contribute to a patent as applied projects. The authors separated grants awarded through a request...

“One interpretation of this is that ‘basic’ research is nearly as productive as ‘applied’ research, which may be surprising to those who question its value,” the authors wrote in their report. “On the other hand, we find little evidence for claims that basic research is substantially more impactful over the period we study.”

“The impact on the private sector is a lot more important in magnitude than what we might have thought before,” coauthor Pierre Azoulay of MIT said in a press release.