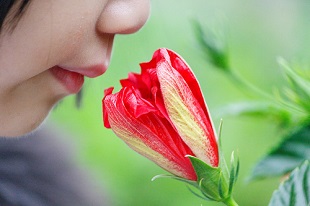 FLICKR, DENNIS WONGThe human nose can smell an average of a trillion different odors, according to a study published last week (March 21) in Science. For decades, researchers believed that the human nose could only perceive around 10,000 different smells, but that number was based on an estimate from the 1920s that hadn’t been empirically tested.

A team led by Andreas Keller from Rockefeller University in New York City used 128 distinct molecules to mix smells that contained 10, 20, or 30 compounds each, and asked 26 volunteers to distinguish the smells. If the scents had more than 51 percent overlap, most study participants couldn’t tell them apart, but if they had less than 57 percent overlap, most subjects could easily distinguish them. The most sensitive smeller could distinguish 10 million trillion trillion scent combinations; the least sensitive could detect a mere 70 million different smells. That made...

“There are probably billions of odorous molecules and we only worked with 128 of them,” Keller told National Geographic’s Not Exactly Rocket Science. “Furthermore, we only mixed 30 compounds. There are many more mixtures with 40 or 50 components.”

“The research goes a long way to addressing the capability of the human olfactory system, but there are still specific questions to be answered about exactly how many individual chemicals can be perceived,” Stephen Liberles of Harvard Medical School, who was not involved in the research, told Nature News.