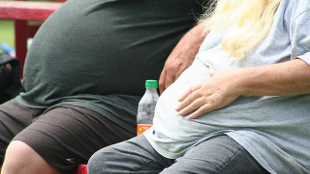 FLICKR, TONY ALTERMore than 30 years of data from 188 nations reveals that the total of obese or overweight people in the world has reached 2.1 billion—nearly 30 percent of the Earth’s population, according to a study published yesterday (May 29) in The Lancet.

“Overweight and obesity have substantially increased everywhere in the world and have undoubtedly become the major health issues of the 21st century,” the University of Graz’s Hermann Toplak, president elect of the European Association for the Study of Obesity, Austria, said at the European Congress on Obesity this week in Sofia, Bulgaria. Toplak pointed the finger at technological advances that promote inactivity and the increasing availability of unhealthy food in developed countries. “The result of these  developments are that in today’s society many children, and indeed adults, no longer build up enough muscle mass and functionality, and have lost the culture of ‘classical eating,’...

The United States is home to 13 percent of the world’s obese people, despite being home to less than 5 percent of the planet’s total population. But rich nations are not the only victims of the obesity epidemic. “Two-thirds of the obese population actually resides in developing countries,” coauthor Marie Ng, a global health professor at Institute for Health Metrics and Evaluation in Seattle, told Reuters. In the Middle East and North Africa, for example, more than 58 percent of men and 65 percent of women are overweight or obese.

The study found that rates of obesity or being overweight rose by nearly 30 percent in adults and almost 50 percent in children worldwide, with the total number of overweight and obese people climbing from 857 million in 1980 to 2.1 billion in 2013. Obesity rates among females showed the greatest increases in Egypt, Saudi Arabia, Oman, Honduras, and Bahrain, while obesity in men rose the most in New Zealand, Bahrain, Kuwait, Saudi Arabia, and the United States.

According to the World Health Organization, complications associated with being overweight kill about 3.4 million people each year. “We have to remind ourselves that obesity is really not a cosmetic issue. It's a main risk factor for morbidity and mortality,” the Institute for Health Metrics and Evaluation’s Ali Mokdad, another author on the paper, told Reuters.