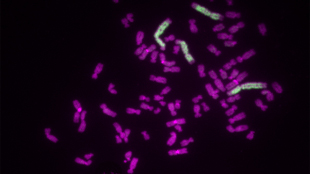 Neochromosomes (green) found in some cancer calls may be up to three times as long as normal chromosomes (magenta).MURDOCH CHILDREN’S RESEARCH INSTITUTE, OWEN MARSHALL

More than half a century ago, scientists noticed a distinctive abnormality in the karyotypes of some soft-tissue cancers: unusually large chromosomes, now referred to as neochromosomes. In a new analysis reported this week (November 10) in Cancer Cell, a team of Australian researchers have uncovered the origins of neochromosomes and revealed mechanisms that could guide therapies to block the chromosomes’ construction.

Using next-generation sequencing and mathematical modeling to investigate the development of neochromosomes, David Thomas of the Garvan Institute in Sydney and his colleagues found that the process appears to begin with the splintering and rearrangement of chromosome 12, followed by breakage-fusion-bridge cycles that lead to the amplification of oncogenes. Notably, neochromosomes often contain dozens of copies of the MDM2 and CDK4 genes, which...

Neochromosomes, which may be up to 700 million base pairs long (three times the size of the longest normal chromosome), also contain bits and pieces of material from all of the cell’s chromosomes, particularly in their telomeres, which are stitched on at later stages.

“These cancers manipulate the normal replication process in an ingenious way, creating a monster that can selectively steal and amplify the genes it needs to grow and survive,” Thomas said in a statement. “In some liposarcoma cell lines, DNA from every chromosome in the cell was found in the neochromosome, with between 60 and 100 copies of key oncogenes. Patient tumours also exhibited similar gene rearrangement.”

“The life history that emerges . . . is apparently a tale of disaster upon disaster,” wrote Joshua Waterfall and Paul Meltzer of the US National Cancer Institute in a commentary on the study. “It is quite surprising that anything functional, let alone beneficial for the cell, can be so created.”