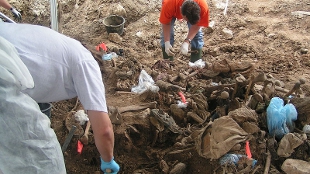 A mass grave in eastern BosniaWIKIMEDIA, POLARGEOWhen the remains of victims of political conflict or natural disasters are so badly damaged that they cannot be identified visually, DNA can often help. With modern genetics technologies, a small bit of tissue may be all that’s needed to determine who’s who. Unfortunately, in many areas of the world facing violent times, such as the current war zone that is Syria, the government and its citizens may not be able to afford such forensic technologies.

According to medical ethicist Alex John London of Carnegie Mellon University’s Center for Ethics and Policy, Lisa Parker of the Center for Bioethics and Health Law at the University of Pittsburgh, and Jay Aronson of Carnegie Mellon’s Center for Human Rights Science, this inequality in access to DNA science should stop. “In the context of poverty and deprivation, forensic identification might appear to be a luxury,”...

Such large-scale efforts are becoming more and more common; one such project continues in Libya, for example, wherein researchers are attempting to identify the bodies that once filled mass graves following the violent reign of Muammar Gaddafi. But funding is not always easy to come by, and equalizing access to such expensive and complicated technology is no simple task. Indeed, DNA identification takes more than just a tissue sample. It also requires a database of familial samples and sizable computer hardware to process all the data—not to mention the DNA sequencing equipment itself.

London and his colleagues propose that formalized international structures—similar to the International Atomic Energy Agency, which sends inspectors to nuclear facilities—be established to promote equitable access to DNA forensics techniques. This could take the form of a single international institution or a decentralized network of agencies, the researchers stated, but in either case would establish the fair and efficient use of the technologies currently available, help protect the citizens in question while identifying their missing loved ones, and set the standard for forensic science the world over.

“Our concern was that there should be a mechanism in place that would allow access to DNA identification beyond just ability to pay,” London told NPR’s All Things Considered. “Too often if there isn’t a funder out there, then people who are missing relatives won’t get access to the technology.”