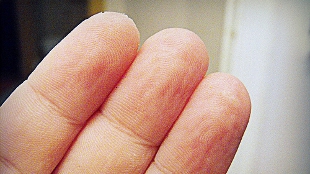 FLICKR, MEDDYGARNETThose unbecoming prune fingers after long baths may have  evolved for a reason, according to a paper published this week (January 8) in Biology Letters. They study showed that people with wrinkly fingers were faster at sorting marbles and other objects in water than those with smooth fingers.

In 2011, another group had proposed that wrinkled fingers act like tire treads, improving traction and grip in slippery environments, but it wasn’t until now that the hypothesis had been tested.  Researchers from Newcastle University in the United Kingdom asked volunteers to soak their fingers in warm water for 30 minutes before moving submerged objects from one side of a box with two sections, through a hole to the other side, where their other hand would catch the item and drop it through a final hole. People with wrinkled fingers completed the task 12 percent faster than when their fingers weren’t wrinkled.

Now the question is how prune fingers offer this advantage. “What we haven't done yet is show why—to see if the wrinkles remove the water, or whether it's some other feature of those wrinkles such as a change in their stickiness or plasticity, or something else,” lead researcher Tom Smulders told BBC News.  “The next thing will be to measure precisely what’s happening at that interface between the objects and the fingers.”