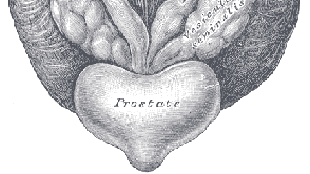 WIKIMEDIA, GRAY'S ANATOMYThe severity of prostate cancer is associated with the density of nerve cells growing in and around the tumor, according to a paper published last week (July 11) in Science. The confirmation that nerve cell growth is associated with poorer outcomes for cancer patients could inspire new treatments, Nature reported.

Researchers examined tumors from 43 human prostate cancer patients and found that those who had greater nerve density in and around their tumors prior to treatment tended to see their disease progress more aggressively.

When the researchers injected mice with human prostate cancer cells and observed tumor formation, they noted that the tumors were infiltrated with cells from the autonomic nervous system, which performs unconscious functions throughout the body. When the researchers ablated nerve cells from the sympathetic nerves, which are associated with the body’s fight or flight response to threats, they found that the mice...

Sympathetic nerve cells have β2- and β3-adrenergic receptors. The researchers found that if they deleted these receptors in the mice, cancer was less likely to grow. The researchers also found that nerves from the parasympathetic nervous system, which controls many of the body’s resting functions, appeared to be promoting the spread of the cancer once tumors had been formed.

“Our findings raise the tantalizing possibility that drugs targeting both branches of the autonomic nervous system may be useful therapies for prostate cancer,” coauthor Paul Frenette of Albert Einstein College of Medicine said in a press release.