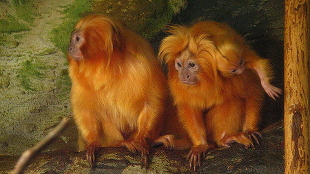 Golden lion tamarins are strictly monogamousWIKIMEDIA, MISTVANScientists trying to explain the evolution of social monogamy in mammals have come up with three leading hypotheses. One holds that two parents are better than one. Another postulates that monogamy is a male mate-guarding strategy that prevents females mating with rival males, especially in species where females are widely spaced so that one male can’t easily monopolize them all. The third contends that it protects against infanticide, where rival males kill offspring to quickly return the mother to a fertile state so they can sire their own offspring.

A study published this week (July 29) in the Proceedings of the National Academy of Sciences supports this third hypothesis, but another study has muddied the waters by yielding findings that back up the mate-guarding theory.

Opie and his colleagues observed a strong correlation between each of the three factors—long spells of parental care, spatial distribution of females, and infanticide by males—and the rise of monogamy in primates. But infanticide was the only behavior to consistently precede a shift to monogamy, suggesting it could be the key evolutionary driver. “Our analyses clearly show that infanticide is the trigger for monogamy in primates,” Opie told ScienceNOW.

Meanwhile, a separate paper published this week (July 29) in Science came to a different conclusion. Tim Clutton-Brock and Dieter Lukas of the University of Cambridge analyzed data from more than 2,000 mammal species, including but not limited to primates, and found that all but one of the transitions to monogamy arose from scenarios where the females were widely distributed in the habitat. Unable to easily copulate with more than one female, the authors suggest, males were likely guarding mates as a way to maximize their number of offspring. In this analysis, infanticide did not appear to be a driver for monogamy.

Clutton-Brock told Nature that the discrepancy could be due to the two research groups categorizing behaviors in different ways. And Opie pointed out to ScienceNOW that wide spacing among females doesn’t occur in highly social, group-living primates, which might make them a special case among mammals.