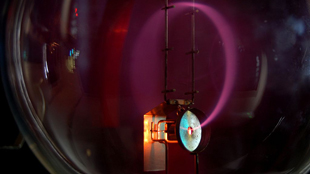 Cyclotron motion illustrated by a beam of electrons moving through a magnetic field in a gas filled bulb.WIKIMEDIA, MARCIN BIALEKCanada’s national laboratory for particle and nuclear physics, TRIUMF, has demonstrated that retrofitted medical cyclotrons can churn out daily supplies of a critical isotope used in many common medical-imaging procedures. The technological achievement, announced on Sunday (June 9), could eliminate the need for nuclear reactors to supply technetium-99m (99mTc), which due to its six-hour half-life, cannot be stored long term.

The global supply of 99mTc, which is a tracer used to examine tumor formation, brain flow, and heart function in tens of millions of diagnostic procedures annually, comes from just two reactors: one in the Netherlands and one in Canada. Both facilities have been shut down multiple times in the past decade during extensive repair outages, threatening to create global shortages. Production at the reactors is...

In February 2012, a TRIUMF-led team first demonstrated that existing medical cyclotrons could be modified to produce 99mTc. “It’s basically an after-factory add on,” Tim Meyer, spokesman for TRIUMF, told Nature.

Over the past year, TRIUMF researchers have worked to scale up production and improve fabrication of the metal used as the source of the isotope. An upgraded cyclotron, recently tested at Vancouver’s BC Cancer Agency, has created 10 Curies-worth of 99mTc overnight. That amount can be used to treat 250 patients and would be enough to meet the daily needs of a city the size of Vancouver.

“This demonstration validates the overall approach that Canada has been championing—that modern, high-power cyclotrons can produce all of the essential isotopes needed in the best hospitals and clinics,” said Richard Eppich, CEO of Richmond, BC-based Advanced Cyclotron Services, Inc., in a statement.

TRIUMF researchers have performed clinical trials in Edmonton and are now seeking regulatory approval, which they hope will come within the next two years.