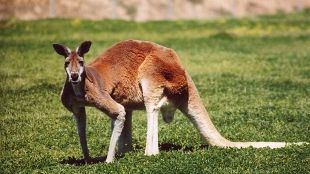 WIKIMEDIA, KEITH EDKINSAustralia’s unofficial mascot, the red kangaroo (Macropus rufus), uses its tail as a fifth leg during locomotion, and the appendage plays an important role in its “pentapedal gait,” according to researchers studying the marsupial. Max Donelan, a biomedical engineer at Simon Fraser University in Burnaby, Canada, and colleagues in the U.S. and Australia today (July 2) published a paper describing the unique walk in Biology Letters. “No one knew how much body weight support it provided, nor had anyone hypothesized about propulsion and power,” Donelan told Science.

Donelan and his coauthors found that a kangaroo’s tail provides more forward-directed force than its hind and forelimbs combined. “Animals have discovered many uses for their tails but, as far as we know, this is the first use of one as a leg,” Donelan told New Scientist. The tails of large kangaroo species, such as the red (which Donelan’s team studied) and the grey kangaroo, are uniquely suited to playing such a role. With more than 20 vertebrae, impressive musculature, and muscle cells packed with mitochondria, kangaroo tails seem built for locomotion.