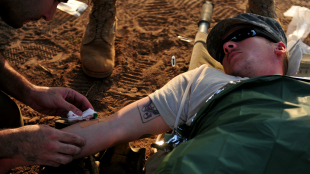 WIKIMEDIA, SSGT TYLER PLACIEKnowing precisely the microbes present in a wound could greatly aid in the prevention and treatment of infections. This is especially important when dealing with the severe injuries that soldiers can suffer in combat, “among the most complex and challenging seen in modern medicine,” Eric Elster, a professor and chairman of the Uniformed Services University’s surgery department, told the Los Angeles Times. In the July issue of the Journal of Clinical Microbiology, Elster and his colleagues report on a method for rapidly detecting the microbiota of US service membes hurt in combat.

The researchers analyzed tissue samples taken from 44 soldiers who had been wounded in Iraq or Afghanistan and subsequently evacuated. The most common microbe they detected, present in about a quarter of the wounds, was Acinetobacter baumannii. Interestingly, the bacteria they found to be associated with wounds that healed (as...

“Studies such as this one will allow us to better understand the interaction between the body and pathogens, and develop new treatment strategies,” Elster told the LA Times.