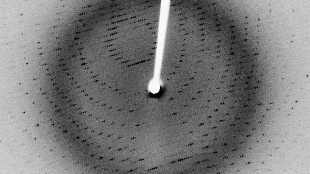 WIKIMEDIA, JEFF DAHLCrystallography—most simply, X-ray scattering by crystals—reveals the structure of molecules. This year, UNESCO is honoring the technique with its International Year of Crystallography, which includes events worldwide to educate and celebrate all that crystallography has done in its 102 years of use. “Almost any solid device or appliance has been designed or improved using crystallography in some way,” wrote Timothy Prior at The Conversation. “It has shaped our modern world in ways almost too numerous to count.”

Although X-ray crystallography has been around for more than a century, its technique and applications continue to advance. For instance, scientists are now using X-ray free-electron lasers, “capable of producing light some billion times more brilliant than that from a synchrotron, and colliding it with tiny crystals in pulses just femtoseconds long,” contributor Jeff Perkel wrote in The Scientist last year. “That’s like taking all the sunlight that...

Georgina Ferry, who wrote a biography of Nobel-prize-winning crystallographer Dorothy Hodgkin, recently penned an article in Nature about crystallography as a field that has been “unusually welcoming” to women. Although always in the minority, “women were among crystallography's earliest pioneers.” Ferry argues that the International Year of Crystallography should be used to replenish a “legacy of equal opportunities.”

UNESCO has honored science in the past. According to Chemistry World, Maciej Nalecz from the organization’s International Basic Sciences Programme said during the opening ceremony that “the international year of physics created a training program that continues to this day, and the international year of chemistry introduced the global water experiment that became part of the school curriculum in many countries. Crystallography has many possibilities for follow up, and I’m absolutely sure this will be a year to remember.”