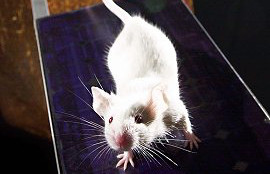 Astronauts who spend long periods of time in space are known to suffer from muscle atrophy and bone loss, but little research has described the effects of microgravity on the skin. A study published in Nature yesterday (May 27) provides a first look—in mice—at how the largest organ of the body responds to long-term space travel. Researchers in Belgium and Italy analyzed skin samples from mice that were sent to the International Space Station (ISS) for three months as part of the Mice Drawer System Tissue Sharing program—the longest rodent space mission to date.

“Ninety-one days for a mouse corresponds to about seven years for a human,” David Green, who studies human physiology at King’s College London and was not involved in the study, told BBC News.

Although three of the six mice sent to the ISS died for various reasons, the team gleaned some interesting—if not statistically...

A microarray-based analysis of genes in the skin also revealed changes in 434, many of which were related to maintaining striated muscle. The space mice also expressed higher levels of hair follicle genes, which, combined with histology analysis, showed that more of their hairs were in the active growth stage called anagen phase.

Since stem cells control hair growth phases, these findings could encourage further study of how microgravity influences stem and progenitor cells. “The effects on hair cycle were totally unexpected. This would deserve more attention in the future because of the critical significance of stem cells in almost any aspect of biology,” coauthor Betty Nusgens, who studies connective tissue biology at the University of Liege in Sart Tilman, Belgium, told The Verge.