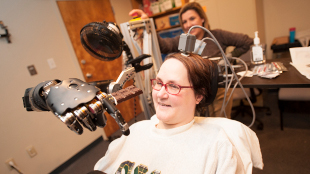 Jan Scheuermann, who has quadriplegia, brings a chocolate bar to her mouth using a robot arm she is guiding with her thoughts.UPMC

By implanting an array of electrodes into the motor cortex of a quadriplegic patient’s brain, researchers at the University of Pittsburgh have enabled the patient to control a robotic, prosthetic hand. The new treatment, published yesterday (December 16) in The Lancet, is a benchmark in thought-controlled movement that rivals the way an unimpaired brain directs limb movement.

“This bioinspired brain-machine interface is a remarkable technological and biomedical achievement,” Professor Grégoire Courtine of the Swiss Federal Institute of Technology Lausanne (EPFL) said in a press release. “Though plenty of challenges lie ahead, these sorts of systems are rapidly approaching the point of clinical fruition.”

Researchers implanted the electrode array into the brain of a 52-year-old, quadriplegic female patient. The array connected to a robotic hand, which...

“In developing mind-controlled prosthetics, one of the biggest challenges has always been how to translate brain signals that indicate limb movement into computer signals,” Andrew Schwartz, lead author of the study, said in the release. “Most mind-controlled prosthetics have achieved this by an algorithm which involves working through a complex ‘library’ of computer-brain connections. However, we’ve taken a completely different approach here, by using a model-based computer algorithm which closely mimics the way that an unimpaired brain controls limb movement.”

After months of testing, the patient was able to control the prosthetic to complete requested hand-movement tasks with a success rate of more than 91 percent. The success comes just 7 months after a similar technology allowed a paralyzed woman to take a sip of coffee on her own.

The researchers hope that the next generation of prosthetic limbs will be able to allow the patient to experience textures and temperatures. (For an in-depth discussion of touch feedback in prosthetic limbs, see The Scientist’s recent feature, “Missing Touch”)