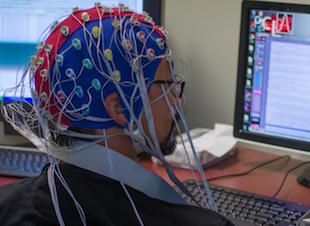 A study participant wears an EEG cap that records his brain activity during a verbal recall taskNATHALIE BELANGERScientists may have an explanation for why startling events like a phone ringing can disrupt one’s train of thought. By recording the brain activities of healthy people and patients with Parkinson’s disease, researchers at the University of California, San Diego (UCSD), found that the brain mechanism involved in stopping body movements is activated when memory is disrupted, according to a study published yesterday (April 18) in Nature Communications.

“The radically new idea is that just as the brain's stopping mechanism is involved in stopping what we're doing with our bodies it might also be responsible for interrupting and flushing out our thoughts,” study coauthor Adam Aron of UCSD said in a statement.

As expected, the participants had worse recall after hearing the birdsong, compared with hearing the simple tone. And hearing the surprising sound also triggered increased activity in a region deep in the basal ganglia called the subthalamic nucleus (STN), part of a brain network previously shown to be involved in stopping bodily movements. This type of brain activity also explains why Parkinson’s patients sometimes freeze or can have trouble changing focus.

The mechanism for losing one’s train of thought might have evolved as an adaptation to threats in the environment, such as encountering a lion in the bushes, the researchers speculated.

“It might also be potentially interesting to see if this system could be engaged deliberately,” Wessel said in the statement, “and actively used to interrupt intrusive thoughts or unwanted memories.”