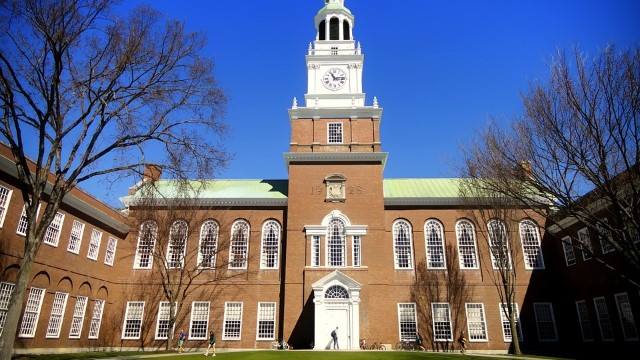 PIXABAY, 12019Update (November 17): A former Dartmouth professor has come forward to say she had reported an incident of sexual harassment involving Todd Heatherton and a student to the associate dean in 2002, Slate reports. Heatherton’s attorney has since released a statement saying that Dartmouth College “was aware of this incident 15 years ago, investigated it, and determined it was accidental and totally unintentional—not a sexual touching at all. Therefore, the College determined that there was no need for any disciplinary action.”

Three professors in Dartmouth College’s department of psychology and brain sciences have been placed on paid leave while an investigation is conducted into allegations of sexual misconduct, prosecutors announced in a statement earlier today (October 31). The researchers, named by Dartmouth as Todd Heatherton, William Kelley, and Paul Whalen, have all been barred from campus property.

The New Hampshire attorney general’s office, “along with the Grafton County...

The news follows the college’s acknowledgement to campus newspaper The Dartmouth last week that the professors had been placed on leave “pending the conclusions of ongoing investigations into allegations of serious misconduct.” The attorney general’s office subsequently learned from Dartmouth that the investigations were tied to sexual misconduct, the statement notes.

Between them, the three professors research the neural processes giving rise to emotion, social behavior, and a sense of self. All three work in labs located in the Moore Hall building in Hanover, New Hampshire, that houses Dartmouth’s department of psychology and brain sciences. So far, newspapers have been unable to reach any of the three researchers for comment, although The Dartmouth reports that Heatherton’s email returned an automatic reply stating the professor was on “sabbatical and not monitoring this email account until September 2018.”

Phil Hanlon, the president of Dartmouth College, addressed the allegations in an email sent this morning, according to a university statement. “It is important to remember that investigations are ongoing, with no official findings yet produced,” Hanlon writes. “However, we take these allegations very seriously and are pursuing our own independent investigations in coordination with law enforcement officials. . . . I want to say in the most emphatic way possible that sexual misconduct and harassment are unacceptable and have no place at Dartmouth. Such acts harm us as individuals and as members of the community.”

In the meantime, prosecutors say they will keep the community updated where possible. “Because this is now a criminal investigation, we are constrained in providing further details at this time,” the statement notes. “We will provide further information when we can do so, consistent with our obligation to ensure the integrity of the investigation. At this time, we have no basis to conclude that there is a threat to the general public.”