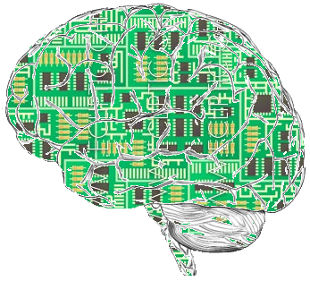 WIKIMEDIA, GENGISKANHGLinking the brains of multiple animals into a single “brainet” may be key to efficiently solving problems with brain-machine interfaces (BMIs), according to two new studies from the group of Miguel Nicolelis at the Duke University Medical Center in Durham, North Carolina. In the first, the researchers used electrodes to link the brains of three monkeys to a computer and allowed each animal to contribute their thoughts to controlling an image of a robotic arm on a screen in front of them. In a second study, on rats, the team linked the rodents’ brains not just to a computer, but to one another, using electrodes to both record and stimulate neural activity, then trained the rodents to synchronize their thoughts.

The results of both sets of experiments, published yesterday (July 9) in Scientific Reports, represent the first “living computers” and demonstrate that animal brains may...

Nicolelis and his colleagues created the monkey brainet by implanting electrode arrays into the animals’ motor cortices. The researchers then showed the animals images of a robotic arm on the screen and gave each monkey control over certain parts of its movement—either a single axis (x or y) or two dimensions (x-y, y-z, or x-z). When the monkeys successfully synchronized their brain activities, the arm moved toward the target and the animals were rewarded with juice. The more times the monkeys did the experiment, the better they got.

“Participating in the Brainet, all three monkeys were able to synchronize their brain activity to produce a unified output capable of moving the virtual arm in 3-D,” Nicolelis said in a press release. “This is the first demonstration of a shared brain-machine interface, a paradigm that has been translated successfully over the past decades from studies in animals all the way to clinical applications. We foresee that shared-BMIs will follow the same track and soon be translated to clinical practice.”

One application Nicolelis foresees for the technology is the control of prosthetic limbs. Perhaps such a brainet could help an experienced user train someone with a new limb to control it, he told New Scientist.

Indeed, if human brains could be linked in a similar way, the results could be spectacular, Iyad Rahwan of the Masdar Institute in Dubai told New Scientist. “It is really exciting. It will change the way humans cooperate.”

VIDEO BY THE NICOLELIS LAB