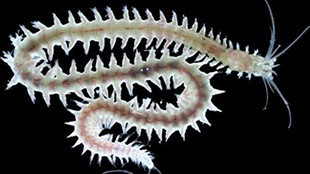 Two marine species have internal rhythms driven by the tide and the moon, independent of ordinary circadian rhythms, according to studies published yesterday (September 26) in Current Biology and Cell Reports.

Marine organisms have long been known to exhibit behaviors that cycle with the tides and the phases of the moon. These rhythms coexist alongside the animals’ circadian rhythms—daily patterns driven by an internal molecular clock.

What has been unclear is whether these behavioral fluctuations result from modifications to the creatures’ circadian clocks, or whether they result from an independent molecular rhythm within the animals. The new studies show—at least in the two species researched—that tidal rhythms remain even if the circadian rhythms are disrupted through various molecular and environmental means.

“This is the first molecular evidence that the clocks aren’t the same,” Chris Chabot, a biologist at...

One group studied the sea louse Eurydice pulchra, an intertidal crustacean that alters its swimming behavior with the tidal cycle. Researchers abolished all of the animals’ rhythms by keeping them in total darkness for more than a month. The researchers were able to reinstill behaviors associated with tides by vibrating the animals' test tubes at regular intervals. Moreover, multiple disruptions to circadian rhythms, including putting the creatures under constant light or knocking down circadian rhythmicity gene expression through RNAi, did not alter tidal rhythmicity, indicating that the tidal rhythms can cycle independently of the circadian rhythms.

“We can completely disrupt the circadian clock, and nothing happens to tidal clock,” Charalambos Kyriacou, an author of the sea louse study and a behavioral geneticist at the University of Leicester, told ScienceNOW.

A second group studied the marine annelid Platynereis dumerilii, or bristle worm, which is noted for its spawning sessions under the new moon. When the researchers administered drugs to interrupt their circadian clock mechanisms, the animals’ lunar cycling was unaffected. However, the lunar clock did appear to affect elements of the circadian clock. Circadian behaviors differed slightly between lunar phases, as did the abundance of molecules known to be involved in the circadian clock.

"Our results suggest that the bristle worm possesses independent, endogenous monthly and daily body clocks that interact," Kristin Tessmar-Raible, an author of the Platynereis study and a researcher at the University of Vienna, said in a statement. "Taking this together with previous and other recent reports, evidence accumulates that such a multiple-clock situation might be the rule rather than the exception in the animal kingdom."