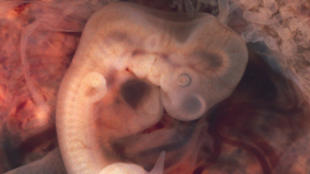 A human embryo at seven weeksWIKIMEDIA, OPENSTAX COLLEGEEver since researchers in China published a Protein & Cell paper this April detailing their use of CRISPR/Cas9 gene editing in early human embryos, a debate over the bioethics of such work has been raging. The National Institutes of Health (NIH) quickly issued a statement indicating that it would not fund such research in humans, but some life scientists disagreed.

Now the Hinxton Group—an international consortium of stem-cell researchers, policy wonks, and bioethicists—has come out in favor of research that involves using CRISPR/Cas9 to edit genes in human embryos but not for the creation of designer offspring. “We all agreed that while this technology has tremendous value to basic research and enormous potential for somatic clinical uses, it is not sufficiently developed to consider human genome editing for clinical reproductive purposes at this time,” the group said in a statement...

The Hinxton Group’s position is more or less aligned with that of Emmanuelle Charpentier of Germany’s Helmholtz Centre for Infection Research and one of the codiscoverers of the CRISPR/Cas9 genome editing system. “For basic science, it’s a very important tool,” she told BBC News. “We want to understand the genetic basis of diseases. . . . Personally I don’t think it is acceptable to manipulate the human germ line for the purpose of changing some genetic traits that will be transmitted over generations.”

The Chinese team that used CRISPR/Cas9 to edit genes in human embryos used tripronuclear zygotes, nonviable early embryos with one egg nucleus and two sperm nuclei, and their attempts were not very successful.

The debate surrounding the use of new technologies to edit the genomes of human embryos for research, clinical, or other purposes is sure to continue. Harvard geneticist George Church told Science that the Hinxton Group’s position doesn’t consider other controversial research techniques. The group’s statement “seems weak on addressing why we should single out genome editing relative to other medicines,” he wrote in an email to Science.

The National Academies of Science is set to hold a summit on genome editing technologies this December.