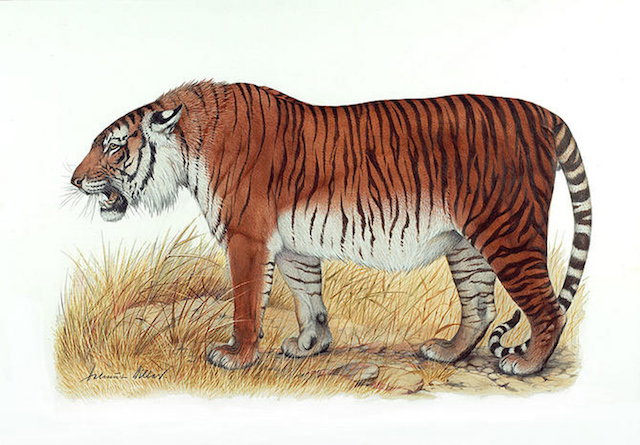 An artist's depiction of a Caspian tigerHEPTNER AND SLUDSKIY, 1972 The Caspian tiger went extinct around 50 years ago, but scientists hope to bring a similar tiger species back to areas of central Asia that are still habitable for these large cats, according to a study published in Biological Conservation last year (December 1).

The 300-pound feline once roamed much of Central Asia, but poaching and habitat destruction led to its extinction in the 1960s. "When [the Caspian tiger] disappeared, the number of nations that hosted tiger populations was reduced by more than half,” study co-author James Gibbs, a conservation biologist and director of the Roosevelt Wild Life Station at the College of Environmental Science and Forestry (ESF), said in a statement.

While the Caspian tiger is gone, scientists hope to introduce a close relative, the Amur tiger, to take its place. Researchers conducted a literature review...

However, the researchers outlined some important changes that need to occur in the region before relocation occurs. These include reintroducing prey populations, such as wild deer and boar, and restricting certain human activities such as poaching and wildfires.

Though only around 500 Amur tigers are left in the wild, relocation should not have negative effects on the existing population, John Goodrich, the senior Tiger Program director at the wildcat conservation group Panthera who was not involved in the study, told Popular Science. "Orphaned cubs are taken into captivity almost every year in the Russian Far East,” he said. “It has been demonstrated that these cubs can be raised in captivity and successfully released back into the wild.”