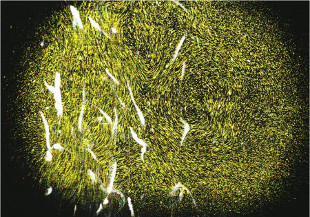 Diminutive drifting animals such as krill and copepods make up a large proportion of the biomass in the world’s oceans, but their effects on ocean circulation patterns are not well understood. A laboratory study of brine shrimp revealed that their swimming could add as much energy to ocean water as winds or tides. The findings, reported this week (September 30) in Physics of Fluids, could inform more accurate climate change predictions.

Although brine shrimp typically live in salty lakes, they exhibit daily migration patterns similar to zooplankton in the ocean. At dusk, large groups of animals swim up to the water’s surface, where they feed on smaller photosynthetic plankton and evade predators in the dark. They retreat to deeper waters at sunrise, sometimes traveling hundreds...

Engineers Monica Wilhelmus and John Dabiri of Caltech took advantage of this behavior to examine the fluid dynamics of thousands of brine shrimp in an aquarium tank. They shone a blue laser to entice the brine shrimp to swim in one direction, and traced the water’s motion using microscopic silver-coated glass spheres, visualized with a high-speed camera.

The swimming shrimp created sizeable eddies in the water. When extrapolated to billions of zooplankton, this phenomenon, known as biomixing, could impart a trillion watts of energy to the ocean each day—as much as winds or tides.

But biomixing in the ocean is difficult to demonstrate, according to physical oceanographer André Visser of the Technical University of Denmark, who was not involved in the research. “I’m not convinced that this is a credible mechanism in ocean mixing,” Visser told Wired.

“The expectation of any card-carrying oceanographer would be that the effect would be negligible, given how tiny these organisms are,” Dabiri told The Washington Post. “But even though we’re talking about organisms just a few millimeters in size, they’re creating this collective effect.”