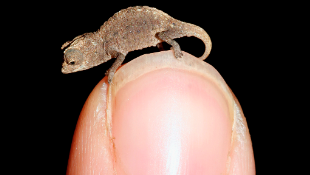 Scouring the forests of Madagascar for 8 years with headlamps, researchers discovered four new species of miniaturized leaf chameleons (Brookesia) in Madagascar. The tiny animals, which are less than an inch long as adults, are among the smallest known lizards in the world.

However, the research, published in PLoS ONE, is not quite as charming as the lizards themselves. Each species has an incredibly narrow range in an already endangered habitat. The researchers’ concern is reflected in the new species’ names, noted neuroscientist Zen Faulkes on his blog NeuroDojo.

One species is Brookesia tristis—Latin for “sad” or “sorrowful”—which “refers to the fact that the entire known range of this species (Montagne des Français) suffers from severe deforestation and habitat destruction despite recently being declared as a nature reserve,” the authors wrote. Another, Brookesia desperata for “desperate” was dubbed thus because “its habitat is...

“Most urgent is to focus conservation efforts on these and other microendemic species in Madagascar which are heavily threatened by deforestation,” said herpetologist Frank Glaw, lead author of the study, in a press release.