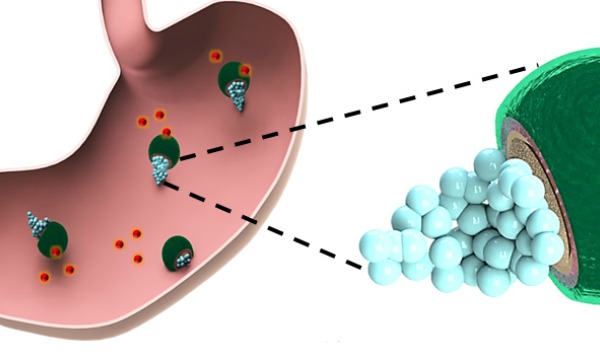 Drug-delivering micromotors (green) are propelled through the stomach by hydrogen peroxide bubbles.LABORATORY FOR NANOBIOELECTRONICS AT UC SAN DIEGOResearchers have built drug-delivery capsules that neutralize stomach acid and use the resulting hydrogen peroxide bubbles to propel themselves and deliver an antibiotic. When tested in mice, the “micromotors” proved slightly more effective than the same dose of antibiotic delivered orally along with an acidity-lowering proton pump inhibitor, researchers report yesterday (August 16) in Nature Communications.

Combatting the Helicobacter pylori bacteria that cause ulcers is a challenge because stomach acid can destroy antibiotics before they have a chance to work, reports New Scientist. To get around this, the drugs are given together with proton pump inhibitors that make the stomach less acidic, but long-term use of the inhibitors can cause side effects.

So researchers led by Joseph Wang and Liangfang Zhang of the University of California, San Diego, devised...

Chemist Thomas Mallouk at Pennsylvania State University who was not involved in the study tells New Scientist, “It’s a really nifty and impressive application. Micromotors are still new, but their impact will be big.”