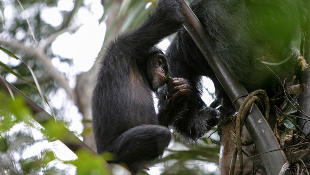 A juvenile chimp drinking palm wine at Bossou, GuineaIMAGE: GAKU OHASHI - CHUBU UNIVERSITY, JAPANThe “Drunken Monkey” hypothesis just got a big evidential boost, according to researchers in Bossou, Guinea, who observed wild chimpanzees stealing sips of palm wine collected by villagers in plastic cups. The findings, published on Monday (June 8) in Royal Society Open Science, suggest that the last common ancestor of humans and extant African apes may have had similar habits regarding the consumption of ethanol. The study’s results “provide an important step towards understanding the evolution of a human behavior that is of great social consequence,” Matthew Carrigan, a Santa Fe College biologist who was not involved in the work, told Discovery News.

An international team of researchers videotaped a troop of 26 chimps in Bossou from 1995 to 2012, recording 51 instances of alcohol consumption involving 13 adult and...

The Bossou chimps used folded or crumbled leaves, which they typically use for drinking water, to obtain the alcoholic beverage. “This absorbent, extractive tool is dipped into the opening of the fermented palm sap container, then retrieved and put into the mouth for drinking,” Hockings told Discovery News.

The observations indicate that chimps are not averse to ethanol in food sources, which supports the Drunken Monkey hypothesis—that the human attraction to alcohol took root deep in the evolutionary past. Because the chimps were essentially stealing booze from people who extracted the ethanol, rather than processing or seeking out ethanol from natural sources themselves, “it still leaves the question of whether chimps or gorillas use foods high in ethanol, such as fallen fruit, without human intervention,” New Mexico State University anthropologist Brenda Benefit, who was not involved with the study, told Science. Other primate species and some birds and insects have been observed seeking out natural sources of ethanol.