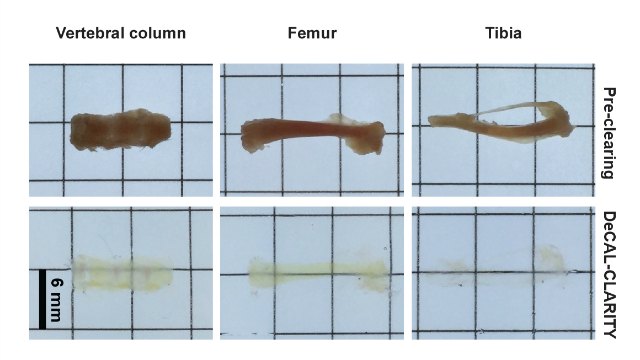 “Bone clarity allows for a whole range of questions that were not possible to previously address,” Corey Neu, a mechanical engineer at the University of Colorado Boulder who was not involved in the study, told Popular Science. Neu said the evidence presented today demonstrates a level of transparency he has not achieved in his own attempts to create see-through bone.

The technique first removes calcium from the bone, then stabilizes cellular structures with a hydrogel, before washing away lipids. Before the tissue-clearing, the mice had been genetically programmed to...

The four-week process to clear the tissue is “not a fast method, by any means,” coauthor Viviana Gradinaru of Caltech told STAT News. “However, the result—there’s no substitute for getting 3-D access to the intact bone marrow.”

In collaboration with Amgen, the team used bone CLARITY to examine the effects of an osteoporosis drug.