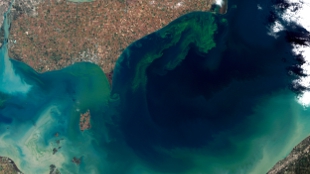 This satellite image shows the algal bloom that occured in Lake Erie in 2011.NASA EARTH OBSERVATORYAfter a parched weekend for more than 400,000 people in and around Toledo, Ohio, safe drinking water is again flowing from their taps, according to city officials. The two-day drinking water ban that started on Saturday (August 2) was prompted by high levels of microcystin—a toxin that can sicken people and kill pets—in Lake Erie, from which water is extracted and processed for municipal supplies. A toxic peptide, microcystin is produced by cyanobacteria, which tend to bloom in the shallow lake during summer months, thanks to phosphorus runoff from farms, fertilized lawns, cattle feedlots, and leaking septic systems.

“Our water is safe,” Toledo Mayor D. Michael Collins told reporters on Monday (August 4) before drinking a glass of tap water at a press conference to announce the lifting of the ban.

Although algal blooms occur in Lake Erie every summer, they became particularly dangerous this year. “Weather conditions made it such that bloom was going right into the water intakes,” Jeffrey Reutter, head of the Ohio Sea Grant research lab, told the Associated Press. This was compounded by the fact that phosphorus levels in the lake have been climbing since the mid-1990s. “We’re right back to where we were in the ’70s,” when Lake Erie was considered heavily polluted, Reutter added.