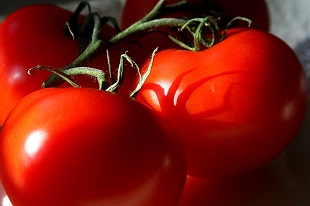 WIKIMEDIA, LIZ WESTTomato plants are capable of detecting defensive chemicals that their neighbors release into the air—and they use those same chemicals to fashion their own deterrents for the invaders, according to a study published last week (April 23) in PNAS. A team led by Junji Takabayashi of Kyoto University in Japan studied how tomatoes respond to cutworms, a moth caterpillar, and a common pest.

“Plants can synthesize a wide array of chemical weapons,” study coauthor Kenji Matsui of Yamaguchi University told Chemistry World, “and the involvement of volatile organic compounds (VOCs) in plant-plant communication has already been reported.” (See “Plant Talk,” The Scientist, January 2014.) The researchers found that a plant infested with cutworms produces a compound called HexVic. Moreover, infested plants released another compound, (Z)-3-hexenol, which their neighboring plants took up and converted to more HexVic.

Ian Kaplan, who studies plant-herbivore interactions at Purdue University, said the findings could inform new approaches to pest control. “Cutworms are big pests for tomato and other crops,” Kaplan told Chemistry World. “This kind of selective uptake of one specific compound and then conversion into a compound that is directly toxic to the caterpillar itself is unusual—it’s nice they show the signal is replicated across really diverse plants.”