Each year, thousands of new species are described. And each year for the last 6 years, the International Institute for Species Exploration at Arizona State University chooses its favorite 10. Last year’s top new species—selected for their unexpected features or for their rare or difficult-to-reach habitats and announced yesterday (May 23)—span the globe from South America to Africa to China and include the world’s smallest vertebrate, an itty-bitty flower, and black fungus that threatens ancient cave art.

“For decades, we have averaged 18,000 species discoveries per year . . . [but] we have identified only about two million of an estimated 10 to 12 million living species, and that does not count most of the microbial world,” Quentin Wheeler, founding director of the Institute, said in a press release. “I don’t know whether to be more astounded by the species discovered each year, or the depths of our ignorance...

He added that the current rate of discovery, while impressive, is not good enough. “Now, knowing that millions of species may not survive the 21st century, it is time to pick up the pace,” he said. “We are calling for a NASA-like mission to discover 10 million species in the next 50 years. This would lead to discovering countless options for a more sustainable future while securing evidence of the origins of the biosphere.” 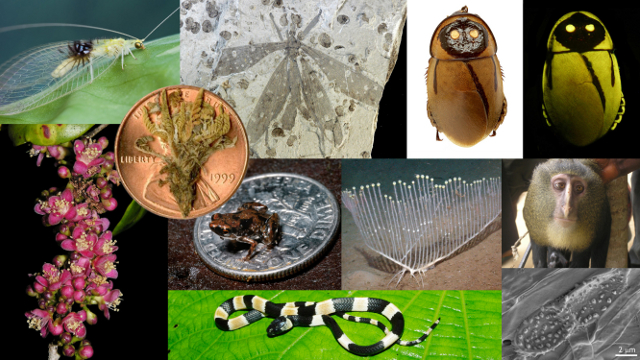 INTERNATIONAL INSTITUTE FOR SPECIES EXPLORATIONThe lilliputian violet (Viola lilliputana) is one of the world’s smallest violets, reaching heights of only 1 centimeter. Found in the high Andes of Peru, it was first collected in the 1960s, but not officially described until last year.

The lyre sponge (Chondrocladia lyra), found off the coast of California, is a carnivorous sponge that lives at depths of more than 3,000 meters. It has an unusual shape that maximizes its surface area, allowing it to better capture its plankton prey.

The lesula monkey (Cercopithecus lomamiensis), common in the Democratic Republic of the Congo, is only the second African monkey species discovered in the last 28 years. They are loud animals, with their booming calls echoing through the jungle at dawn, and are described as having human-like eyes, but are nevertheless hunted for bush meat.

Sibon noalamina is a snake that eats snails and other soft-bodied prey, which it hunts at night in the rainforests of Panama. This tropical serpent has coloration like that of venomous coral snakes to defend itself from predators.

Ochroconis anomala is a black fungus best known for its detriment to the Paleolithic paintings on the walls of the Lascaux Cave in France. When it’s not wreaking havoc on ancient art, the fungus is found in the soil decomposing plant matter.

Paedophryne amanuensis is the tiny frog that wins the prize for the world’s smallest vertebrate, averaging only 7.7 millimeters in length. It can be found hiding in the leaf litter of the tropical forests of New Guinea.

Eugenia petrikensis, an endangered shrub of Madagascar, is emerald green with glossy foliage and clusters of small magenta flowers. It can be found within kilometers of the ocean growing on sandy substrate.

Lucihormetica luckae of Ecuador is the newest addition to the list of glow-in-the-dark cockroaches, which luminesce in their low-light environments. But the species may already be extinct, as it was described from a single specimen collected 70 years ago.

Semachrysa jade of Malaysia owes its discovery to a photograph posted on Flickr. Taken by Hock Ping Guek, the photo of this green lacewing insect was discovered by entomologist Shaun Winterton of the California Department of Food and Agriculture, who recognized it as an unusual specimen. Guek then sent a specimen to Stephen Brooks at London’s Natural History Museum, who verified it as a new species.

Juracimbrophlebia ginkgofolia is a fossil species of hangingfly, which can be observed hanging beneath foliage, where they hunt their insect prey. The new species was found preserved with the leaves of a gingko-like tree in China’s Jiulongshan Formation, and dates to the Middle Jurassic.

Correction (May 27): The original version of this story incorrectly stated that Semachrysa jade was a butterfly. The Scientist regrets the error.