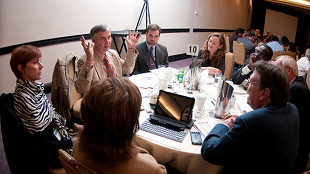 A group of 47 researchers, overwhelmingly from UK-based institutions, have laid out a list of 40 “key unanswered questions” in science policy, published on March 9 in PLoS One.

At a workshop in Cambridge, the group members were asked to submit their top questions—totaling 239—which were then whittled down to a list of 40, and divided into six categories. The questions are abstract, considering the relationship between science and policy, rather than asking straightforward questions about particular scientific questions or fields.

“We don’t claim it’s definitive. It’s an open invitation for a wider discussion of this area,” Robert Doubleday of the University...

The uninvolved policymakers that Nature spoke with for comment were, overall, unimpressed by the list, however. “The big challenge is that most scientists and policymakers remain blissfully unaware of all that we do actually know,” said Harvard’s Sheila Jasanoff. “This is a failure of education, and maybe also of science communication.”