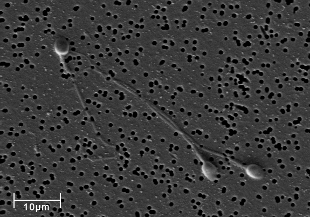 Micrograph by scanning electron microscope (SEM) of human sperm cells (spermatozoa) magnified 3,140 times.WIKIMEDIA, FORSKERUNVResearchers from the Wellcome Trust/Cancer Research UK Gurdon Institute and their colleagues at the Weizmann Institute of Science have identified the transcription factor SOX17 as a key regulator of human primordial germ cell development. Their work was published in Cell last week (December 24).

SOX17 was previously associated with endoderm lineages. In this latest study, the researchers found that SOX17 prompted human induced pluripotent stem cells toward a male or female germline lineage. They then used the technique to produce early egg- and sperm-like cells in vitro.

“It is exciting that [these] labs have found a way to generate progenitor germline cells with the highest efficiency ever reported,” University of California, Los Angeles’s Amander Clark, who was not involved in the work, told Nature.

In their paper, the researchers described how their approach...