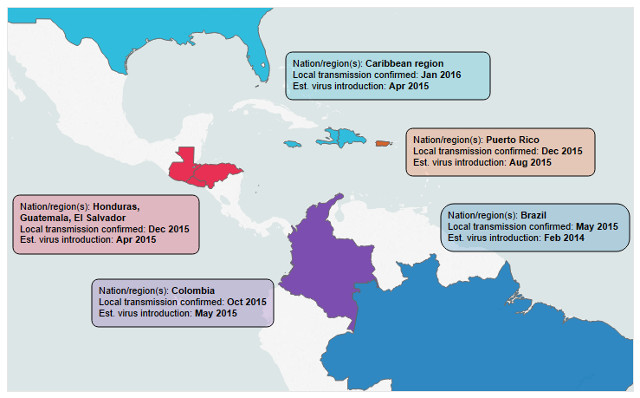 BROAD INSTITUTEWhole-genome sequences of 110 Zika virus isolates from people and mosquitoes from 10 countries have allowed researchers to analyze the virus’s spread across the Americas. Combining the new sequences with 64 previously published genomes, the researchers tracked the origins of the Zika virus responsible for outbreaks in South America, Central America, the Caribbean, and the U.S., to a common ancestor in Brazil in 2014. From there, the virus formed genetically distinct clusters as it spread north, according to the analysis published yesterday (May 24) in Nature.

In regions including Colombia, Honduras, Puerto Rico, and the southern U.S., Zika appears to have been present for up to a year before the first reports of infections and associated microcephaly cases. “This means the outbreak in these regions was underway much earlier than previously thought,” coauthor Bronwyn MacInnis, associate director of malaria and viral genomics at the Broad Institute’s Infectious...

Meanwhile, another study also published yesterday in Nature reports on 54 partial and complete Zika genomes—one of which represents the earliest confirmed Zika virus infection in Brazil—generated by a mobile genetics lab traveling through the northeastern part of the country last year. Again combining these data with previously published Zika sequences, the researchers confirmed the results of MacInnis’s study: the outbreaks across the Americas can be traced to a strain that originated in Brazil in early 2014.

“The establishment of the epidemic, the outbreak, in the Americas almost certainly happened in northeast Brazil. Northeast Brazil is the region with the highest number of recorded Zika cases and the highest number of confirmed microcephaly cases,” coauthor Oliver Pybus, a zoologist at the University of Oxford and the San Francisco-based biotechnology company Metabiota, said at the press briefing.

In a third Nature study published yesterday on Zika virus genomics, researchers sequenced 39 isolates from Florida, finding that the virus was introduced to the state multiple times—with anywhere between 4 and 40 separate introductions. “It’s not a one-off event,” coauthor Kristian Andersen, an immunology and microbial science researcher at the Scripps Research Institute, said at the press conference. “This is something that keeps happening over and over again.”

The volumes of newly available Zika genomes could help researchers to better understand how the virus is transmitted, as well as to identify mutations that may make the virus more virulent. “We expect these data will be useful for researchers designing up-to-date molecular diagnostics and vaccines and to improve the tools we have to protect and prevent future Zika outbreaks,” MacInnis said.

Such genomic data could become even more important in the face of a declining number of Zika cases, which threatens enrollment in large-scale trials designed to test experimental vaccines, Nature reported yesterday. “That’s good for the population—if making it more difficult to get reasonable data for the study,” Anthony Fauci, director of the NIH’s National Institute of Allergy and Infectious Diseases (NIAID), told the publication. “Sometimes a study that you think would take two years, winds up taking four or five years. But ultimately we hope that we can get some meaningful data.”