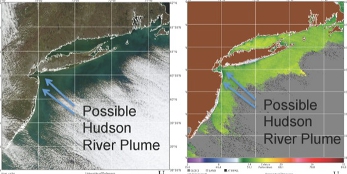 True color (left) and sea surface temperature (right) showing slight discoloration and cooler temperatures typical of a river plume from the Hudson River.University of DelawareMillions of gallons of raw sewage flowed into New Jersey waterways in the aftermath of Hurricane Sandy, which flooded much of the eastern seaboard. Now, oceanography professor Matthew Oliver and colleagues at the University of Delaware (UD) are following it out into the ocean, looking for coastal plumes of river discharge in satellite images.

“Technically, you can’t identify raw sewage from a satellite, but you can find river discharge that you suspect has raw sewage,” Oliver said in a press release. “River discharge usually has a very different temperature and color than the surrounding waters.”

As super storm Sandy made its way up the coast, it damaged several wastewater treatment facilities, resulting in the release of untreated sewage into the nearby waterways, including...

At the same time, researchers in the Mid-Atlantic Regional Association Coastal Ocean Observing System (MARACOOS), of which Oliver is a participating member, and the New Jersey Department of Environmental Protection (NJDEP) installed a satellite dish at UD focused on the New Jersey area, yielding real-time images of the sewage’s path.