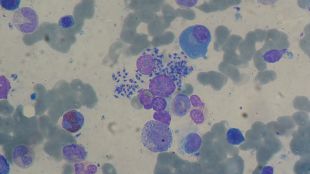 WIKIPEDIA, PAULO HENRIQUE ORLANDI MAURAOThe roots of the plant Pentalinon andrieuxii have been used by Mayans for years to treat infections from the parasite Leishmania, and researchers know now why: a compound from the plant, newly synthesized in the lab, reduces parasite load in infected mice.

“Pentalinonsterol could represent the next generation of small-molecule-mediated immunotherapy for visceral leishmaniasis,” Elizabeth Sharlow, a pharmacologist at the University of Virginia who did not participate in the research, told Chemical & Engineering News.

The disease, caused by Leishmania protozoa, is typically transmitted by sand fly bites. Victims suffer fever and weight loss, and can die if untreated. Up to 40,000 people die each year from visceral leishmaniasis. Although there are treatments available, most are expensive, come with side effects, and can lead to drug resistance.

In seeking alternatives to the typical medications, Abhay Satoskar of Ohio State University and his colleagues...

According to Chemical & Engineering News, the team is now designing an oral form of the medication and working to figure out its molecular mechanism.