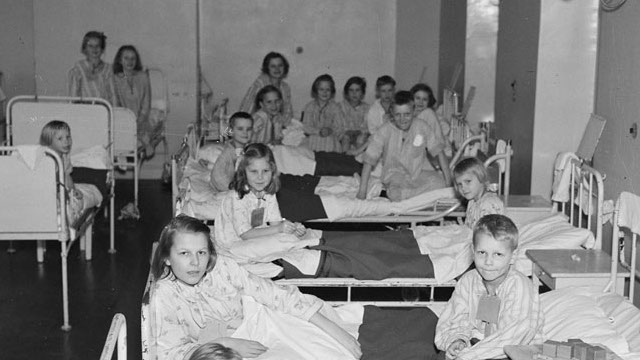 Finnish children evacuated to Stockholm during World War IIWIKIMEDIA, TORE BURNÄSPrevious research has shown that the 50,000 Finnish children evacuated from their home country and sent to temporary foster care in Sweden during the Second World War had higher rates of psychiatric hospitalization compared with those who stayed with their parents. Now, a study published today (November 29) in JAMA Psychiatry suggests the same is true of the daughters of female evacuees, suggesting that trauma can be passed down through the generations.

“Many studies have shown that traumatic exposures during pregnancy can have negative effects on offspring,” coauthor Stephen Gilman, an epidemiologist at the National Institute of Child Health and Human Development and Johns Hopkins Bloomberg School of Public Health, says in a press release. “Here, we found evidence that a mother’s childhood traumatic exposure—in this case separation from family members during war—may have long-lasting...

But whether the effect is due to something related to the offspring’s DNA is unclear, Gilman tells Newsweek. It’s possible that epigenetic differences were passed on through the oocyte. For example, previous work has found higher levels of methylation on certain genes that lead to altered cortisol production in Holocaust survivors. Alternatively, the children of evacuees may have suffered as a result of higher rates of mood disorders and psychiatric hospitalization of their mothers, and how that affected their parenting.

See “Ghosts in the Genome”

“The Finnish evacuation was intended to protect children from the many harms associated with the country’s wars with the Soviet Union,” coauthor Torsten Santavirta of Uppsala University says in the press release. “Our observation of long-term psychiatric risk that reached into the next generation is concerning and underscores the need to weigh benefits as well as potential risks when designing policies for child protection.”