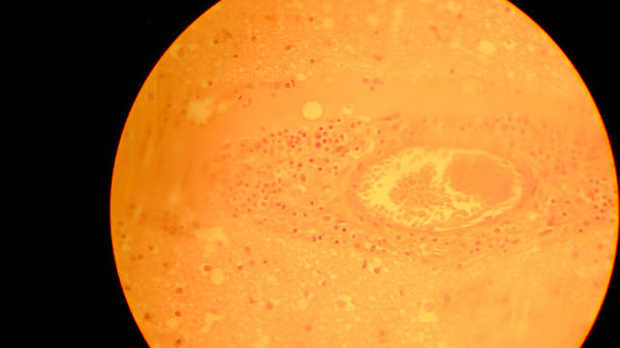 Toxoplasma gondiiFLICKR, MICHAEL WUNDERLITuring Pharmaceuticals made headlines last week after raising the price of its recently acquired Daraprim, a drug used primarily to treat the parasitic infection toxoplasmosis, from $13.50 to $750 per pill. Company founder and chief executive Martin Shkreli claimed the monumental price increase will support research into a new and improved drug for the disease, which can cause life-threatening illness in people with compromised immune systems and in babies born to women infected during pregnancy. “We needed to turn a profit on this drug,” he told Bloomberg last week (September 21). “We’re spending tens of millions of dollars to make a better version of Daraprim.”

But even before Shkreli became national news for justifying the Daraprim price hike, researchers at the Indiana University School of Medicine and University of Notre Dame reported a possible alternative treatment for toxoplasmosis: a well-established hypertension drug. Working in mice, the...

“This finding was a big surprise and a potentially very important discovery,” study coauthor Bill Sullivan, a professor of pharmacology and toxicology at the IU School of Medicine, said in a statement last week (September 21). “There are few reports of pharmacological agents that have an effect on the latent stage of toxoplasmosis.” The researchers published their results online in August in Antimicrobial Agents and Chemotherapy.

And because guanabenz is already approved by the US Food and Drug Administration for treating high blood pressure, it could be quickly repurposed for toxoplasmosis patients, Sullivan added. “The fact that this drug is already FDA-approved makes this great news.”

Sullivan and his collaborators also demonstrated that guanabenz inhibited replication of the malaria parasite, which is related to the organism that causes toxoplasmosis. The researchers are now further exploring guanabenz’s mechanism of action.