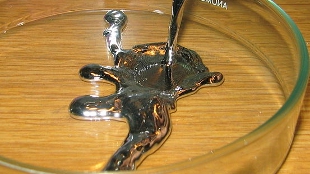 WIKIMEDIA, MATERIALSCIENTISTAfter 4 years of negotiations and an all-nighter this past weekend, delegates in Geneva came to a consensus at 7 a.m. Saturday morning (January 19): more than 140 nations agreed to enter the Minimata Convention, a treaty to regulate the use of mercury in everyday commodities, such as batteries, fluorescent lamps, and cosmetics, as well as mercury emissions from coal power plants, gold mines, and certain types of factories. Other sources of mercury that the delegates discussed include dental fillings, medical thermometers, and blood pressure devices. The treaty, named for the Japanese city that suffered one of the worst bouts of mercury poisoning, aims to significantly reduce global mercury emissions by 2020.

“After complex and often all night sessions here in Geneva, nations have today laid the foundations for a global response to a pollutant whose notoriety has been recognized for well over a century,” Achim Steiner, executive...

While the treaty was welcomed by researchers and non-governmental organizations (NGOs) as a needed first step, some worry that it is not enough. The Zero Mercury Working Group, a coalition of non-governmental organizations that lobbies for strong mercury protection measures, for example, pointed out that limits on the use of mercury in coal power plants—one of the two main sources of mercury contamination—won't go into effect for 5 to 10 years.

“[A]s it stands now, the treaty offers only vague or no options for controlling emissions from the world’s worst sources of mercury pollution,” agreed Joe DiGangi, senior science and technical adviser of the International POPs [Persistent Organic Pollutants] Elimination Network, or IPEN, a coalition of 700 NGOs in 116 countries, in a statement. “Without a more deliberate effort to curb these sources, we can anticipate that global mercury pollution will likely continue to increase.”

The new convention will be open for signatures at a special meeting held this October in Minimata.

(Hat tip to ScienceInsider and Nature)