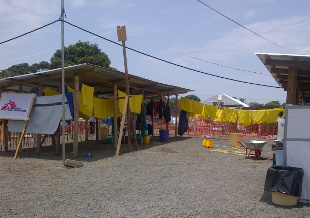 An Ebola treatment unit in neighboring LiberiaWIKIMEDIA, CDC The experimental treatment of people infected with Ebola using blood plasma from patients who survived Ebola infection has not significantly decreased mortality, according to a field evaluation published yesterday (January 7) in The New England Journal of Medicine. The trial was intended to test whether transfusions containing survivor-derived, Ebola-fighting antibodies might be effective at combatting the disease in other patients.

“Of course you would like to dream and see a very strong reduction in mortality, but we didn't see this,” coauthor Johan van Griensven of the Institute of Tropical Medicine in Antwerp, Belgium, told Reuters.

The trial was carried out in Guinea, the site of the most recent outbreak, at a medical center in the nation’s capital, Conakry. Researchers compared death rates in a test group of 84 patients who received donated plasma with rates in a control group...

They found slightly lower death rates in the plasma-treated group compared to the control group (31 percent and 38 percent, respectively), but the difference was not statistically significant. The effect of treatment was even less striking once additional factors like age were accounted for.

However, the study did not directly measure the level of antibodies in donors’ blood plasma due to the lack of access to labs with appropriate safety equipment in the affected areas. Vanderbilt University Medical Center’s William Schaffner, an infectious disease specialist who was not connected with the study, emphasized to Reuters that the conclusion of the current study “does not mean antibodies to Ebola are not going to be a good treatment.”

The researchers did highlight weak evidence that the treatment might be effective for certain people. They noted in their article that pregnant women and children under five—two of the groups with the poorest prognoses—had lower mortality rates following transfusions, hinting that at least some subgroups might benefit from treatment with donated plasma.