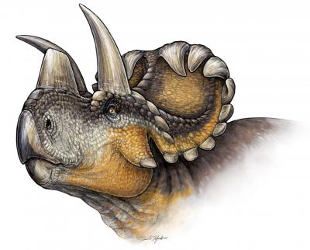 A life reconstruction of Wendiceratops pinhornensisIMAGE - DANIELLE DUFAULTThe Triceratops family just got a little bigger. Researchers have unearthed a distant relative of the iconic dinosaur in southern Alberta near the Montana border, and the new species harbors clues to the evolution of horned dinosaurs. Dubbed Wendiceratops pinhornensis for veteran fossil hunter Wendy Sloboda, who discovered the site in 2010, the new dinosaur is described in a PLOS ONE study published yesterday (July 8).

“Whether you’re looking at a triceratops or at our Wendi, all the important evolutionary details for these horned dinosaurs are in the skulls,” study coauthor Michael Ryan of the Cleveland Museum of Natural History told the Washington Post. “If you just cut their heads off and looked at their bodies from the neck down, you wouldn't be able to tell them apart.”

Of particular interest to paleontologists is the lengthy nose horn of...

Another coauthor agreed about the evolutionary importance of the find. “Wendiceratops helps us understand the early evolution of skull ornamentation in an iconic group of dinosaurs characterized by their horned faces,” David Evans, a paleontologist at the Royal Ontario Museum in Toronto, said in a statement. “The wide frill of Wendiceratops is ringed by numerous curled horns, the nose had a large, upright horn, and it’s likely there were horns over the eyes too. The number of gnarly frill projections and horns makes it one of the most striking horned dinosaurs ever found.”

Wendiceratops, which was 6 meters (19.7 feet) long and weighed more than a ton, joins another recent addition to Ceratopsidae, the family that includes Triceratops. Last month, researchers reported the discovery of Regaliceratops peterhewsi, which sported an impressive arsenal of spikes and horns on its head.