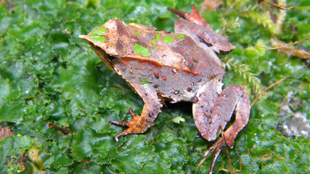 R. darwiniiCLAUDIO SOTO-AZAT, ZOOLOGICAL SOCIETY OF LONDONBatrachochytrium dendrobatidis (Bd)—is a skin infection that kills amphibians around the world. Two affected species, Rhinoderma rufum and R. darwinii, are found in Chile and Argentina and called Darwin’s frogs, based on Charles Darwin’s involvement in their discovery. Scientists from England, Germany, and Chile have now shown that Bd was likely involved in the extinction of R. rufum and the decline of R. darwinii. Their work was published in PLOS ONE this week (November 20).

The researchers sampled for Bd in multiple species of wild amphibians in Rhinoderma native habitats in Chile and Argentina and preserved specimens in museums in South America and Europe. They found that all the Bd-positive archived amphibians had been collected in the 1970s, around the time that numbers of Darwin’s frogs began to decrease and that 12.5 percent of living amphibians in...

Study coauthor Claudio Soto-Azat of Andres Bello University in Chile told LiveScience that habitat loss is also a probable reason for the decline of Darwin’s frogs.

“We can’t tell conclusively what has been causing the death of these frogs but we are putting together a powerful circumstantial case,” the London Zoological Society’s Marcus Rowcliffe, who did not participate in the research, told BBC News. “We ought to be extremely concerned.”