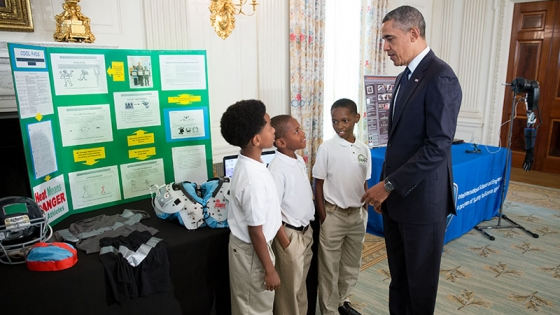 As demonstrators were preparing to descend upon Washington, DC, and other cities around the country and world for last weekend’s March for Science, a White House official told CBS News that President Donald Trump would be following in the footsteps of his predecessor, Barack Obama, by holding a science fair at the White House sometime in the near future.

President Obama hosted the first White House science fair in 2010, and children from all over the country traveled to the nation’s capital to show off their projects annually for the subsequent six years. Some of the highlights, conceived by science, technology, engineering, and mathematics (STEM) students, included a cushion...

“Science is not partisan; nor are the wonderful STEM students who will keep fueling American innovation—they deserve to be celebrated,” Kumar Garg, a former Office of Science and Technology Policy staffer who led the planning of the fair in the Obama White House, told CBS.