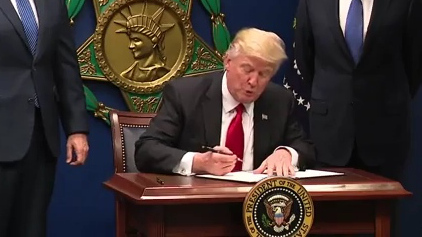 WIKIMEDIA, STAFF OF POTUSPresident Donald Trump signed an executive order on Monday (January 30) that will require federal agencies to repeal two existing regulations for every new one they adopt. “It is the policy of the executive branch to be prudent and financially responsible in the expenditure of funds,” according to the executive order. “It is essential to manage the costs associated with the governmental imposition of private expenditures required to comply with Federal regulations.”

As he signed the order, STAT News reported, Trump said he was fulfilling a campaign promise to loosen government regulations and promote innovation. “There will be regulation, there will be control,” he said. “But it will be normalized control.”

Rick Pollack, CEO of the American Hospital Association, praised the executive order in a statement. “Reducing the administrative complexity of health care would allow providers to spend more time on patients, not paperwork,” he...

But some officials were less certain that the executive order was a good idea. As STAT reported, the order could cripple the 21st Century Cures Act, the landmark legislation passed to accelerate US Food and Drug Administration (FDA) evaluations and boost federal funding.

Others questioned whether the order is likely to make a difference, from a regulatory standpoint. “It’s just a very indirect and gimmicky way of deregulating,” Eric Posner, a law professor at the University of Chicago, told Politico. The order could even have the opposite effect. “It’s likely to further drive the [FDA] away from rulemaking, and even deeper into the thicket of guidance documents and other ‘non-regulatory instruments that often have the same force and effect as regulations,” David Vladeck, a law professor at Georgetown University, told BioCentury.

Meanwhile, the notion of agencies such as the FDA being forced to carefully select how they regulate food and drug safety was enough to make some officials nervous. “That’s a completely illogical way of doing things,” Joan Claybrook, former head of the National Highway Traffic Safety Administration told the Los Angeles Times. “It’s going to harm the public. People are going to die if you start eliminating safety standards.”