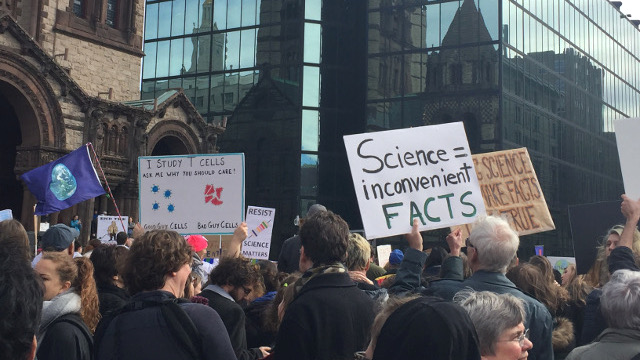 Scene at the “Stand Up for Science” event in Boston, February 19, 2017TRACY VENCE

Reporters from The Scientist will be covering March for Science events in Berlin, Chicago, and DC. Check for our coverage—on the-scientist.com, Facebook, and Twitter—starting April 22.

Sociologists to Study the March for Science
Researchers hope to use the upcoming event as an opportunity to examine the social science of political activism among science supporters.

Opinion: After We March
How to become—and stay—involved in science policy

The Science of Science Advocacy
Should researchers advocate for the inclusion of science in public policymaking?

March for Science Gains Support from Scientific Societies
AAAS and more than 25 scientific societies throw their support behind the event.

Marching for Science, from Berlin to Sydney
Satellite marches across the globe aim to stand in solidarity with US scientists and highlight issues in their home countries.

Opinion: Sometimes, Scientists Must March
Lessons learned from the “Death of Evidence” demonstration in Canada

Opinion: Should Scientists Engage in Activism?
Scientists who accept funding with the tacit agreement that they keep their mouths shut about the government are far more threatening to an independent academy than those who speak their minds.

Will a March Help Science?
As scientists and science advocates plan demonstrations in Washington, DC, and around the world, some question the ability of such activism to enact change.