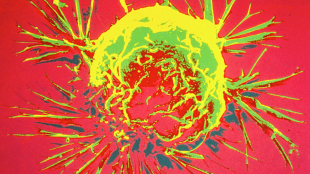 WIKIMEDIA, NATIONAL CANCER INSTITUTECells give off little membrane-bound bubbles called exosomes, which are known to contain microRNAs (miRNAs)—short stretches of RNA that can interfere with protein production. Exosomes have also been associated with cancer metastasis. According to a  study published in Cell last week (October 23), tumor-linked exosomes can produce their own miRNAs from starter material, and these miRNAs can enter neighboring cells and incite them to form tumors.

“Collectively, this study unravels the possible role cancer exosomes play in inducing an oncogenic ‘field effect’ that further subjugates adjacent normal cells to participate in cancer development and progression,” Raghu Kalluri, a cancer biologist at MD Anderson Cancer Center, and his coauthors wrote in their report.

Comparing exosomes derived from normal cells to those derived from breast cancer cells, Kalluri’s team found the proteins responsible for chopping up miRNA precursors into their mature form present only in the...